The Legacy of John F Kennedy: Life, Assassination and Conspiracies

John F Kennedy was the 35th President of the United States from 1961 to 1963. He was the youngest person ever elected to the position. JFK was killed in Dallas, Texas, on November 22, 1963, just passed his first thousand days in office, becoming the youngest President to die.

On November 22, 1963, little over a thousand days into his presidency, John F Kennedy was assassinated as his motorcade passed through Dallas, Texas. Kennedy was the youngest President to be elected; he was also the youngest to die.

When 43-year-old John F Kennedy was elected as the 35th President of the United States in 1960, he became one of the country's youngest presidents and the first Roman Catholic. He was born into one of America's wealthiest families. He used an exceptional education and a military hero reputation to run for Congress in 1946 and the Senate in 1952.

His assassination in Dallas, Texas, on November 22, 1963, sent shockwaves throughout the world, transforming the all-too-human Kennedy into a larger-than-life heroic figure. Historians still consider him to be one of the most beloved presidents in American history.

Despite recurrent health issues throughout his infancy and adolescence (he was subsequently diagnosed with Addison's disease), Jack lived a wealthy life, attending prestigious schools such as Canterbury and Choate and spending summers in Hyannis Port on Cape Cod. 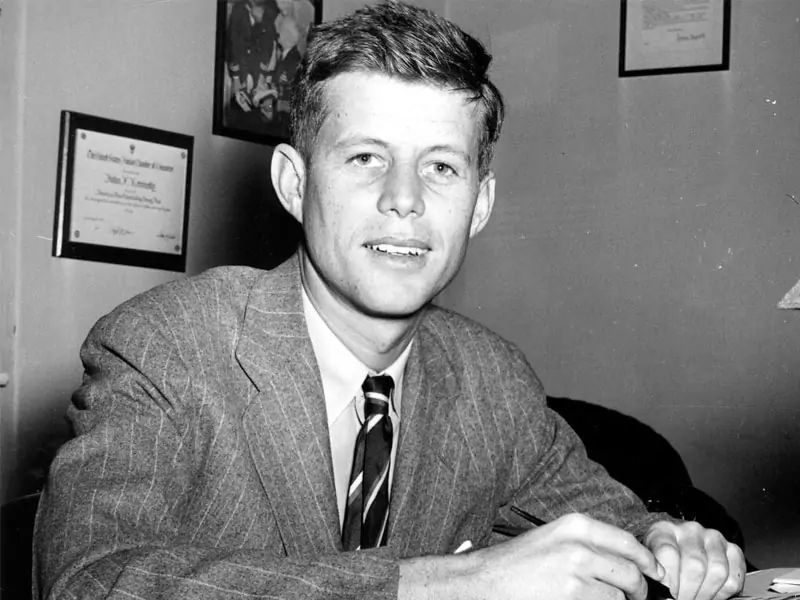 A tremendously successful businessman and early supporter of Franklin D. Roosevelt, Joe Kennedy was appointed head of the Securities and Exchange Commission in 1934 and designated US ambassador to the United Kingdom in 1937. As a Harvard University student, Jack went around Europe as his father's secretary.

Did you know that? John F Kennedy's Senate career began on a sour note when he failed to criticize Senator Joseph McCarthy, a personal friend of the Kennedys. The latter was convicted by the Senate in 1954 for his persistent pursuit of suspected communists. In the end, despite his intention to vote against McCarthy, Kennedy was unable to vote because he was hospitalized following back surgery.

Jack entered the US Navy in 1941 and was transferred to the South Pacific two years later when he was assigned command of a Patrol-Torpedo (PT) boat. In August 1943, a Japanese warship collided with the PT-109 in the Solomon Islands. Kennedy was given the Navy and Marine Corps Medal for heroism after assisting some of his marooned crew members to safety. Joe Jr., his elder brother, was not so lucky: he was murdered in August 1944 when his Navy jet exploded while on a covert mission against a German rocket-launching facility. A bereaved Joe Sr. informed Jack that it was his responsibility to fulfill Joe Jr.'s destiny of becoming the first Catholic President of the United States.

Despite his father's continuous chastisement, young Kennedy was a lousy student and a naughty young man. He went to Canterbury, a Catholic boys' boarding school in Connecticut. He excelled at English and history, subjects he loved but nearly flunked Latin, which he detested. Despite his dismal marks, Kennedy completed his education at Choate, a prestigious Connecticut preparatory school. Despite his evident brilliance, as demonstrated by the incredible deliberation and complexity of his work on the rare times when he dedicated himself, Kennedy remained a terrible student, preferring sports, ladies, and practical jokes over academics.

Kennedy moved to Harvard University in 1936 after graduating from Choate and spending one semester at Princeton. He repeated his by then the well-established academic pattern, occasionally succeeding in subjects he loved but proving just an average student due to the ubiquitous distractions of sports and women. Kennedy was extremely popular among his Harvard classmates because he was handsome, personable, and endowed with a dazzling grin.

"Jack was more fun than anyone I've ever met," his buddy Lem Billings said, "and I think most people who knew him felt the same way about him." Kennedy was also a serial womanizer. 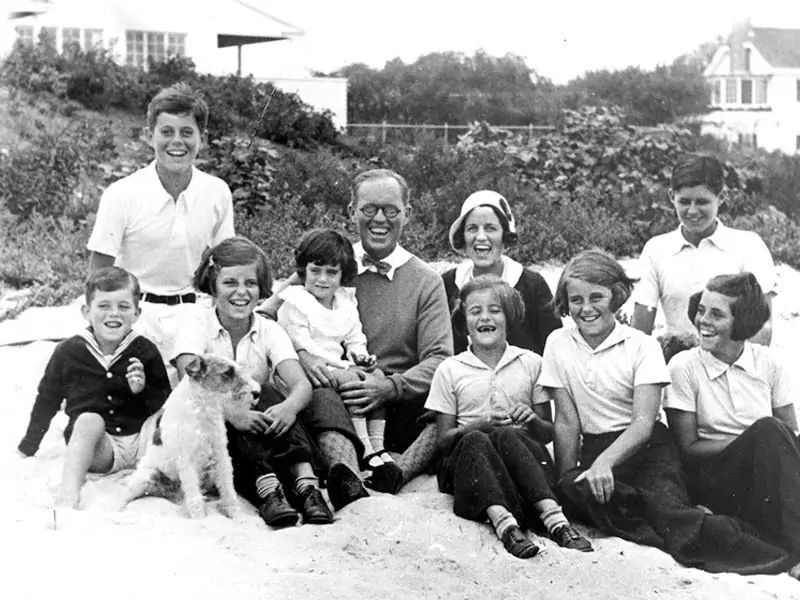 By the end of 1944, Jack had abandoned his aspirations to become a journalist and had left the Navy. He was back in Boston less than a year later, preparing for a bid for Congress in 1946. As a somewhat conservative Democrat supported by his father's money, Jack easily won his party's nomination and won the largely working-class Eleventh Congressional District by nearly three to one over his Republican opponent in the general election.

He was 29 when he was elected to the 80th Congress in January 1947. He quickly drew notice (and some criticism from elder members of the Washington elite) for his young look and easygoing, casual demeanor.

Kennedy was re-elected to the House of Representatives in 1948 and 1950. He campaigned for Senate in 1952, upsetting popular Republican incumbent Henry Cabot Lodge Jr. Kennedy married the lovely socialite and journalist Jacqueline (Jackie) Lee Bouvier on September 12, 1953. He was obliged to have a severe back procedure two years later. While recovering from surgery, Jack authored Profiles in Courage, which received the Pulitzer Prize for biography in 1957.

After almost winning his party's selection for vice president (under Adlai Stevenson) in 1956, Kennedy declared his presidential campaign on January 2, 1960. He defeated the more liberal Hubert Humphrey in the primaries. He picked the Senate majority leader, Lyndon Johnson of Texas, as his running partner. In the general election, Kennedy faced a tough fight against his Republican opponent, Richard Nixon, a two-term vice president under the popular Dwight D. Eisenhower.

Kennedy profited from his performance (and telegenic appearance) in the first-ever televised debates, which were viewed by millions of viewers as a young, dynamic alternative to Nixon and the existing quo. In November's election, Kennedy won by a slim margin–less than 120,000 votes out of about 70 million cast–becoming the country's youngest president and the first Roman Catholic.

Kennedy's attractive young wife and their two little children (Caroline, born in 1957, and John Jr., born only weeks after the election) gave the White House an unmistakable air of youth and elegance.

In his inaugural address on January 20, 1961, the new President urged his fellow Americans to strive together in the pursuit of development and the abolition of poverty and the fight to win the global Cold War against communism. Kennedy's famous final comments emphasized the need for American collaboration and sacrifice: "Ask not what your nation can do for you; ask what you can do for your country.”

In April 1961, Kennedy approved a proposal to launch 1,400 CIA-trained Cuban exiles in an amphibious operation at the Bay of Pigs in Cuba, resulting in an early crisis in the foreign affairs arena. The expedition, which was intended to spark an uprising against communist leader Fidel Castro, failed miserably. Almost all of the exiles were arrested or killed. That June, Kennedy visited with Soviet leader Nikita Khrushchev in Vienna to discuss the city of Berlin, which had been split between Allied and Soviet authority following World War II. 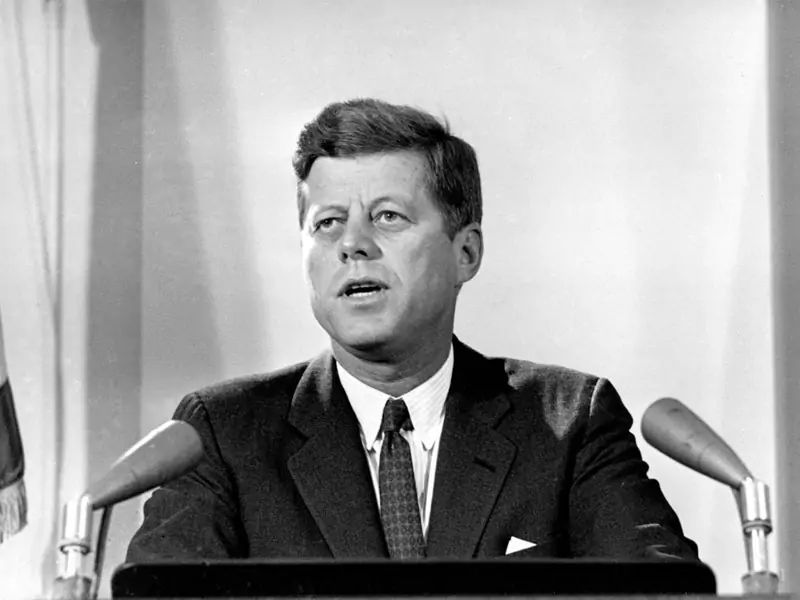 East German forces began building a wall to separate the city two months later. In June 1963, Kennedy dispatched an army convoy to reassure West Berliners of US backing. He delivered one of his most memorable addresses in West Berlin.

During the Cuban missile crisis in October 1962, Kennedy and Khrushchev fought once more. Kennedy declared a naval blockade of Cuba after learning that the Soviet Union was developing several nuclear and long-range missile installations in Cuba that may constitute a danger to the mainland United States.

In July 1963, Kennedy achieved his most important foreign policy success when Khrushchev agreed to sign a nuclear test prohibition pact with him and British Prime Minister Harold Macmillan. The tense standoff lasted nearly two weeks until Khrushchev agreed to demolish Soviet missile installations in Cuba in exchange for America's commitment not to attack the island and the relocation of US missiles from Turkey and other locations near Soviet borders. In Southeast Asia, however, Kennedy's determination to stem the rise of communism prompted him to expand US participation in the Vietnam War, although privately expressing dismay at the situation.

During his first year in office, Kennedy supervised the establishment of the Peace Corps, which would deploy young volunteers worldwide to poor countries. Otherwise, he was unable to pass most of his planned legislation, including two of his top priorities: income tax cuts and a civil rights measure, within his lifetime. Kennedy was hesitant to commit to the civil rights movement, but he was finally compelled to act, sending federal soldiers to back the desegregation of the University of Mississippi after rioting there killed two people and injured many more.

The next summer, Kennedy declared his intention to present a comprehensive civil rights measure and backed the enormous August March on Washington.

Kennedy was a hugely popular president both at home and internationally. His family was likened to King Arthur's court at Camelot. His brother Bobby was his attorney general. His youngest son, Edward (Ted), was elected to Jack's previous Senate seat in 1962. Though reports of her husband's repeated marital infidelities would eventually surface to alter the Kennedys' idyllic image, Jackie Kennedy became an international icon of elegance, beauty, and refinement.

The assassination of John F Kennedy The President and his wife arrived in Dallas on November 22, 1963, after speaking in San Antonio, Austin, and Fort Worth the day before. The group then rode in a motorcade from the airport to the Dallas Trade Mart, the location of Jack's next speaking engagement. As the motorcade passed through downtown Dallas soon after 12:30 p.m., bullets were fired; Kennedy was hit twice in the neck and head and was declared dead shortly after arriving at a nearby hospital.

Lee Harvey Oswald, twenty-four years old and known to have Communist sympathies, was arrested for the murder but was shot and killed two days later while being escorted to jail by local nightclub owner Jack Ruby. Other hypotheses about Kennedy's killing arose almost immediately, including KGB, Mafia, and military-industrial complex conspiracies, among others. A presidential commission led by Chief Justice Earl Warren ruled that Oswald acted alone. Still, the assassination has been the subject of conjecture and dispute. 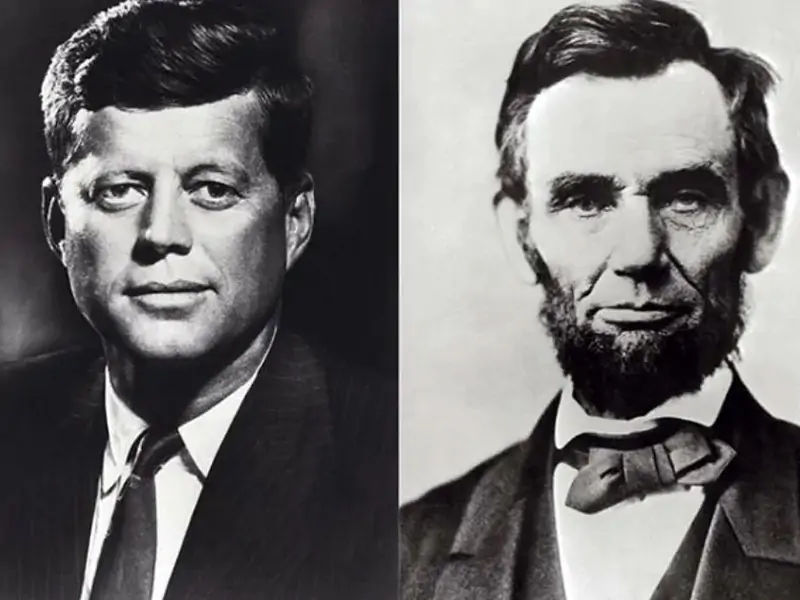 1. Both Abraham Lincoln and John F Kennedy were elected to Congress in 1946 and were elected President in 1960.

3. When Kennedy was assassinated, he was riding in a Lincoln. Lincoln was Lincoln's surname.

6. Lincoln and Kennedy were both followed by Vice Presidents.

7. "Honest Abe" was Lincoln's nickname. After cutting down his father's cherry tree, Kennedy once stated, "I cannot tell a lie."

8. Lincoln and John F. Kennedy both died of Lou Gehrig's disease, not from gunshot wounds, as is generally assumed.

9. On the same day, October 12, both Presidents were killed.

10. Despite DNA tests, a 100-year gap, and widespread public perception, Lincoln and Kennedy were the same people.